His Majesty King Jigme Khesar Namgyel Wangchuck has been in reign for 8 years since 2006 though the public coronation took place much later on 1st November, 2008. So as we plough through the sixth year of constitutional democracy, it is important that we recall that His Majesty also played a very crucial role in realizing the vision of his great visionary Father King Jigme Singye Wangchuck. The actual transition to democracy happened during the early reign of the 5th King though it originated from the Throne of the 4th King. Therefore His Majesty has a big commitment and personal stake in the success of the constitutional democracy.

Democracy in my view is on one hand a proven platform for promotion of individual human rights and governance by the people.  On the other hand, especially, for a tiny and economically poor country, democracy is also a spongy field into which seeps insatiable greed for power and wealth. It also provides fertile opportunities for external forces to intervene and disrupt internal affairs of the nation. Such divisive internal factors and aggressive external influences can tear apart the fragile social and political fabrics which have been nurtured for centuries.

In today’s world, there are no true Allies or trusted colleagues. The revelation about America spying on even NATO Leaders demonstrates that a close and trusted ally is actually a callous vulture. Bhutan is in a precarious position. It is jammed between the world’s two most populous nations with unpredictable political mood swings and ambitions. And add on to this situation, our own political immaturity and gullibility buoyed up by jostle for power and influence. All this together puts our national security and stability upon greater precipice.

Therefore the challenges that a King faces under Constitutional Democracy are rather daunting. And yet the challenges must be met for sake of Bhutanese nation and prosperity. The King of Bhutan must be selflessly impartial and fearlessly brave to secure for all time to come, the sovereignty of Bhutan and the happiness of her people.

On this occasion of Coronation Anniversary, I pray that the Deities of Pelden Drukpa bless and aid the King in his monumental task of guiding the nation in all spheres of national interest and the unity of all Bhutanese. I respectfully wish for the Reign of His Majesty the King and Her Majesty the Queen to bring further happiness to the Bhutanese society and the Royal Institution. Long Live their Majesties the King and the Queen. 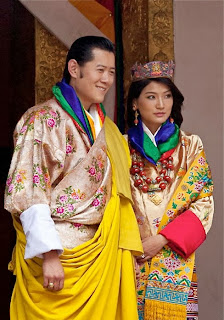 I feel fortunate to be able to joyfully share the joy of the Nation in the celebration of the 2nd Anniversary of the Royal Wedding of the 5th King and Queen.
The two informal royal snapshots in the congratulatory messages in Kuensel (i) The King with left arm around the Queen (ii) His Majesty adjusting the wonju sleeve of Her Majesty, together reveals the joy, care and concern of all truely in love couples.
Today as one watches the BBS TV re-screening the scenes of the Royal Wedding celebrations of 13th and 14th October, 2011, nostalgic emotions surges overboard – such array of joyful colours, happiness and innocent harmony!! May the historic memories of purity and happiness of one people, one nation celebrating the Royal Nuptial sustain the people and the Kingdom as Bhutan moves ahead towards the unfathomable future.
May the Deities of Palden Drukpa bless the Kingdom with many decades of the Royal Wedding Anniversary celebrations under the golden reign of His Majesty the King Jigme Khesar Namgyel Wangchuck and Her Majesty Queen Jetsun Pema Wangchuck. May the love and happiness of the royal union anchor the peace, security and prosperity of Bhutan and all Bhutanese.