Rix Xin has made the following comments on my recent article of 14th March about ECB decisions regarding two cases of Phuentsholing and Thimphu Thromde Elections. Refer http://wangchasangey.blogspot.com/.

Rix Xin states to Quote, “I quote author,  " He had an individual private trade licence and yet the Election Commission had chosen to illuminate the term profit in the widest of imagination as in doing trade for profit to get the candidate out of the way" I dont find it reason enough to prove that he is innocent. On the other hand, MPs attending official lunch and wishing them good luck cannot be politicized that too months before actual campaign started " Unquote.

I thank Rix Xin for reading the article and giving his considered views. The reproduced photo and comments that was posted in fb on 27th November,2015 is the subject of discussion here. 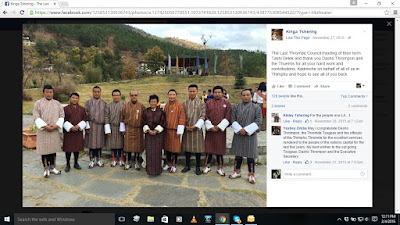 I write not really as a response to Rix Xin but to bring better clarity for those interested in participating in future elections.

Just to set the fact straight, Thromde Election Campaign began on 26th December, 2015 and photo was taken on 25th November, 2015 and posted with comments two days later on 27th November.  So it is not " months " before election campaign. And it was not an ordinary "official lunch ". The occasion was the last Thromde Committee Meeting after which the Members resigned before their term ended to participate in the 2nd Thromde Election. So it was the day of publicly confirming their candidacy for the coming election. Therefore, the event is very much political.

Regarding Phuentsholing's former Thrompon owning a private trade licence. The business was managed by another person so it is similar to owning shares in a corporation that is managed by a separate corporate management entity. Have political candidates been disqualified for having corporate stocks/shares in their names? The answer is No. So the Office of Profit rule actually implies to influence and money that is available with a Public Post as in the Government or Public Office or Company and not really to additional income source of private business nature.

Having made the above clarifications, what is important is about the parameter in which future Candidates of an election can operate/campaign without being censured by the ECB. I call that the Bench Mark. And Bench Mark should not be altered at political whims or fancies nor according to the mood of ECB.
To illustrate my point in clear terms for any layman to understand, let me give this example.

Hereafter, if a Thrompon or thuemi candidate of Haa Thromde is publicly endorsed by the two People's Democratic Party MPs of Haa on the day he or she declares candidacy, that person should not be disqualified by ECB under the article 31 (b). And same democracy allowances should be accorded to all other Candidates regardless of their individual social status or the status of their political backers. This means that article 31 (b) of local election act must be scrapped.

I feel that the General Bhutanese Public would like the Election Commission of Bhutan to act fairly and be honourably rational in the conduct of Election matters and interpretations of election laws. Transparency is not that important because Dictators are very transparent in their actions and yet not considered guardians of democracy. They are simply not accountable to Laws for their actions.
Posted by Wangcha Sangey at 9:10 PM